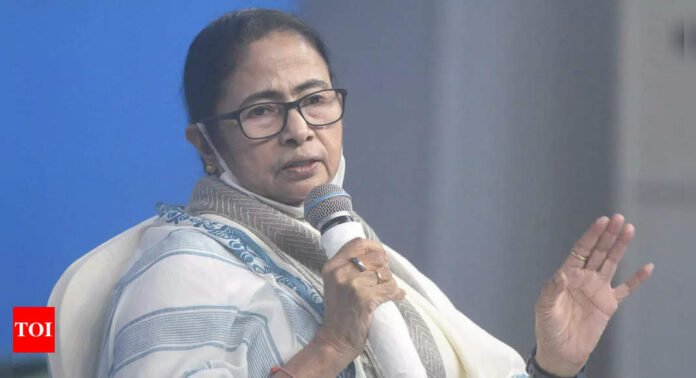 NEW DELHI: West Bengal chief minister Mamata Banerjee on Wednesday called the Rampurhat incident in Birbhum unfortunate but added that such incidents are more frequent in UP, Gujarat, Madhya Pradesh, Bihar and Rajasthan.
Mamata, who will visit Rampurhat tomorrow, said she is not justifying the incident and her government will take action in a fair manner.
“Strict action will be taken against all those responsible for the Birbhum incident, irrespective of their (political) colours,” Mamata said.
Eight people were charred to death as their houses were set on fire in Bogtui village near Rampurhat town of Birbhum district early on Tuesday. The incident was possibly a fallout of the murder of a deputy pradhan of Baguti village on Monday night.
“The government is ours, we are concerned about people in our state. We would never want anyone to suffer. The Birbhum, Rampurhat incident is unfortunate. I have immediately dismissed the OC, SDPO. I will go to Rampurhat tomorrow,” Mamata said.
Taking a dig at the BJP, Mamata said: “This is Bengal, not Uttar Pradesh. I had sent a delegation of TMC to Hathras but we were not allowed an entry. But we are not stopping anyone from coming here.”
Mamata alleged that such incidents of violence are results of conspiracy hatched to divert attention from issues of concern, such as price hike of petrol and other commodities.
BJP president J P Nadda had on Tuesday constituted a five-member committee, which includes four MPs, to visit the site of the tragedy.
Mamata’s reaction comes on a day the Calcutta high court has taken suo motu cognizance of the incident. West Bengal governor Jagdeep Dhankar has also reacted strongly to the incident and has accused the chief minister of shielding the accused.
(With inputs from agencies)

When it comes to taking steps to fight climate change, Americans broadly support